Season Four reloads with a new round-based Zombies experience, Multiplayer updates, a brand-new objective mode in Warzone, and other much more. 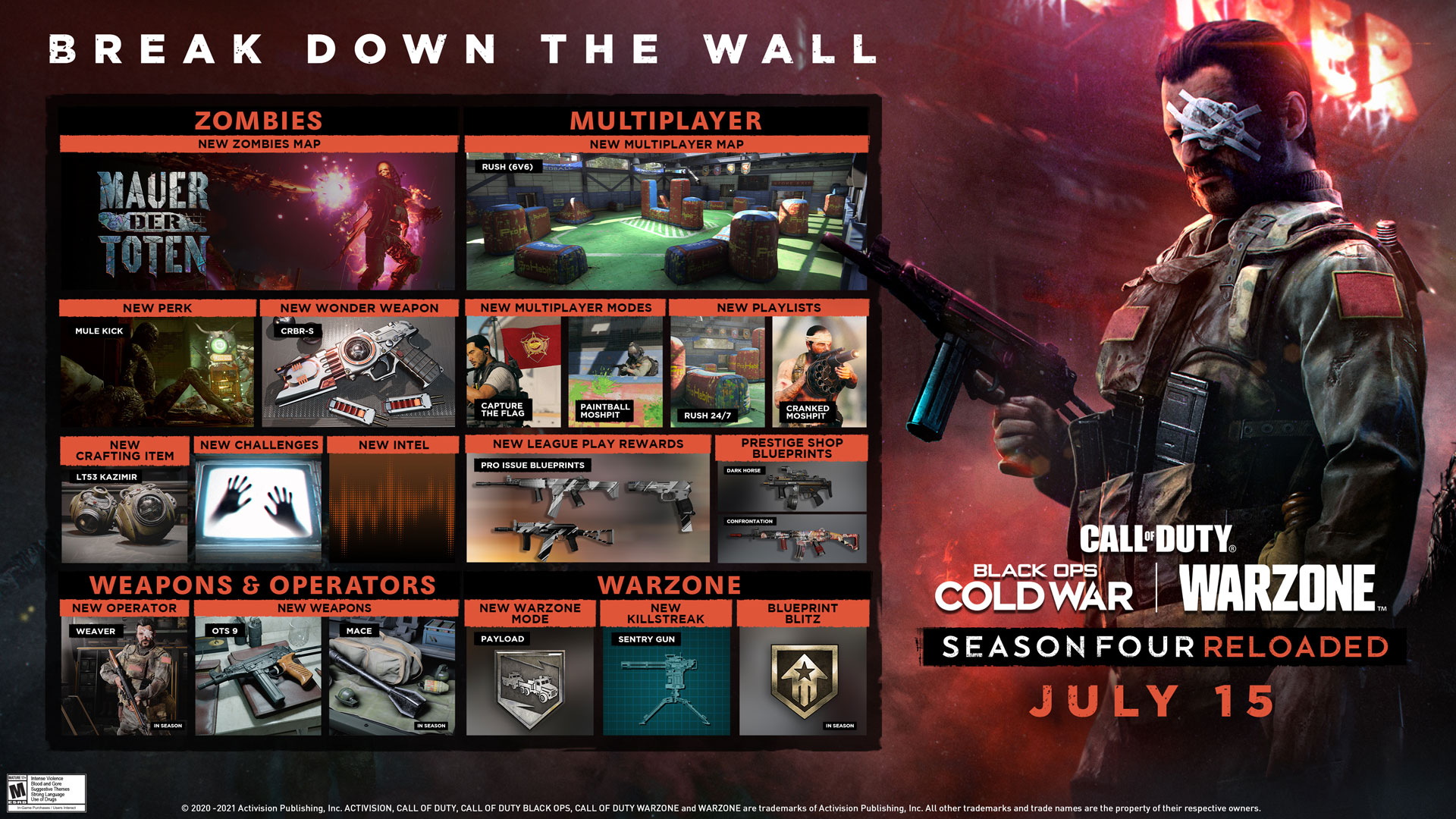 A brutal mercenary leader, Jackal has ground his competition into the dirt, recruiting only the strongest survivors into his company. Hated and feared, he works for the highest bidder, and Perseus has very deep pockets…

Salah (coming to the Store in-season)

A member of Egypt’s elite Unit 777 formed following the expulsion of the Soviets, Salah is a Counterterrorism and Hostage Rescue expert. Always positive and quick to see the best in people, he will always have your back.

Weaver (coming to the Store in-season)

Born in the USSR and raised in America, CIA Clandestine Service Officer Grigori Weaver straddles both sides of the Cold War divide. With this Operator Skin based on his original Black Ops incarnation, Weaver’s dedication compels him to return to duty even after the recent loss of his left eye.

Boasting great stopping power and a phenomenal rate of fire, the OTs 9 is hindered only by its low magazine capacity of 20 rounds.

Those who control its recoil will find it can work well in individual engagements, and with available magazine attachments, it holds its own in squad fights.

A weapon ill fit for the weak, Mace can inflict critical damage on command — no dice rolls needed on whether it can bludgeon your rivals in a single blow within Multiplayer.

A downed CIA satellite has smashed into an abandoned village near an oil drill operation, setting the stage for a clash in the scorching Algerian desert.

Rush through the map’s buildings, caves, arched canyons, dunes, and the satellite itself to get the drop on your opponents.

While the Strike version of this desert locale is tailored for 6v6 play, the 12v12 version includes vehicular combat, as Operators are able to make use of air-to-ground assaults and fend off rival aerial vehicles.

Revisit the iconic location from the opening of the Black Ops Cold War Campaign. The rooftops feature plenty of cover and spots to jump out and surprise your enemies to create a frenetic setting for quick engagements.

The iconic Black Ops II classic gets remastered for Black Ops Cold War Season 4. Set aboard a superyacht, Hijacked features open decks on the bow and stern, tight interiors, and risky side lanes funneling the battle to the center deck.

Another Black Ops II classic is coming later in the season. Prepare to show off the art of war in this remastered paintball-themed 6v6 map. This chaotic arena offers multiple opportunities for up-close-and-personal combat, with narrow choke zones to scurry through and a scattering of exterior structures offering longer-range takedown possibilities.

Power up and keep your satellite online for as long as possible to gain points in the latest mode for ten quads across a variety of locales in the Ural Mountains.

Upon reaching the Sat-Link marked on your map, your squad will power it up. It will then unfold and start uploading crucial data to the satellites still in orbit. Before you reach a site, search for item crates that may contain powerful Scorestreaks or other items to help you wipe other squads also tasked with transferring classified intel.

The team that reaches the score limit first achieves victory.

One in the Chamber (available at launch)

One in the Chamber gives you three lives and a single, incredibly lethal bullet. If that one shot lands anywhere on an enemy, they will lose a life while you gain another bullet. Melee attacks are also lethal, so be prepared for some serious fisticuffs if you and your enemy both lose your golden bullet.

An objective mode whose roots stem from the very first Call of Duty Multiplayer experience, Capture the Flag (CTF) is a competitive game where squads must take the enemy’s flag and return it to their home base, while also defending theirs from the enemy team.

A flag will not be captured unless a team’s own flag is safe in their base, so squads must have both a good offense and defense to win the match.

Later in the season, Treyarch is expanding the paintball experience out of Rush and into the wider world of Black Ops Cold War Multiplayer in the new Paintball Moshpit. This new way to play MP will introduce paintball visual effects and impact sounds to the action across a selection of maps and modes.

A semiautomatic handgun chambered in a ridiculously high-caliber round, the Hand Cannon delivers lethal damage to anywhere on the body, as the sheer kinetic impact incapacitates any Operator at a minimum, or blows them to smithereens with a well-placed shot.

The Hand Cannon can also deal significant damage to enemy vehicle Scorestreaks, especially those on the ground, but with only eight rounds in its chamber, it may be worth using them all on infantry forces.

Welcome to the Zoo (available at launch)

Prepare for your squad to get a little wild with this new Outbreak region deep within the Ural Mountains, set in a sprawling zoo overrun by the undead. Don’t feed the zombies as you complete objectives, uncover new Dark Aether story Intel, and even find some World Events.

The Dark Aether story will expand in Outbreak at the start of the season with Operation Excision, the newest Zombies Main Quest that will serve as a narrative prologue to the next round-based map coming mid-season.

Fans of Die Maschine, Firebase Z, and other classic round-based Zombies experiences will be welcomed home in Mauer der Toten, the next chapter in the Black Ops Cold War Zombies coming mid-season.

Taking place after the events of Operation Excision in Outbreak, the Dark Aether story will continue in Treyarch’s next Zombies map, where players will take on new terrors in war-torn East Berlin after a devastating zombie invasion has overtaken the city.

Zombies players on PlayStation should ready themselves for new updates to Onslaught in Season Four, starting with Collateral as a new map on launch day, complete with new story Intel to discover.

Later in the season, expect to face the horde on the Multiplayer map Rush, fight at breakneck speeds in the Onslaught Accelerated limited-time mode, and get your hands on a Legendary LMG Weapon Blueprint for completing an Onslaught-specific challenge.

Several Satellites have crash-landed in Verdansk, leaving you and your squad to investigate their rubble.

Although they won’t appear on your Tac Map, the Satellite Crash Sites will be plainly visible in Verdansk, as the debris and impact on the landscape is significant. Besides offering new opportunities for cover, the satellites themselves can also be secured.

Interact with the Sat-Links found in the area to work toward receiving permanent rewards in the Ground Fall event at the beginning of the season. Also, secure helpful items to use during the match, such as powerful Killstreaks, vehicles, and Field Upgrades.

The Red Doors (available at launch)

Red Doors won’t [[REDACTED]] unless you ping them, and after you step through, there’s no telling [[REDACTED]] exiting out the other side… and stepping into a [[REDACTED]].

Prepare for your mission in Black Ops Cold War and challenge a rival to win back deployment to Warzone with this mock-up of the classic map Hijacked, which will replace the current Standoff Gulag when Season Four launches.

This truncated version features a plywood re-creation of the yacht’s central area, a prime location for important objectives such as a Domination flag in Multiplayer, which has the same location as the Overtime flag spawn during a Gulag duel.

No need to worry about rough waters here, although you may need to avoid hitting the rocks being thrown from the balconies during your fight for survival.

With an excellent turning radius, carry yourself and a companion across the concrete jungle, up goat trails, and down rock-filled ravines with ease. Deft and nimble, this new option to the Warzone ground transportation fleet is ready to compete with the ATV in terms of furious off-road action.

In addition to becoming the new fastest vehicle in Warzone, the Dirt Bike will have some unique handling properties, such as wheel traction, sliding, drifting, and vehicle leaning, allowing you to take epic hairpin turns, dodge oncoming fire, or pull off sick stunts by controlling your orientation in the air.

In addition, all Dirt Bike skins you may have unlocked in Black Ops Cold War (e.g., via previous Battle Passes or Store Bundles) will be accessible, allowing you to customize your ride as soon as you saddle up.

The towering Downtown complex across from the Financial District is here to stay after its tenant decided to move back West to sunny Los Angeles. This point of interest, now referred to by Operators as Downtown Tower, has had its vault opened and cleared of valuables, but remains a vast and strategically valuable location to dominate your enemies from.

Although it may be under new management, expect the meta tactics you learned during the ’80s Action Heroes event to come in handy.

The Resurgence has spread from Rebirth Island to Verdansk, and now every kill counts even more toward victory.

In addition to the standard rules — no Gulag, extreme clarity on enemy positions upon elimination of a squad member, a Resurgence timer, and special Supply Boxes — the Verdansk Resurgence Mini features more intimate lobby sizes of 44 to 45 Operators at maximum, depending on the squad size.

Games begin in a compact DZ, with circles inside a random position in Verdansk. The first circle will be “skipped” to create a small, dense, and action-packed starting area. The items you’ll find around here are more frequent and of higher quality compared to a traditional Battle Royale mode, with games also expected to be shorter in length on average for a truly bite-sized first-person shooter survival experience.

This game mode will be available in a variety of squad sizes — Solos, Duos, Trios, and Quads — which is likely to swap into the Featured Playlist Rotation weekly following Season Four’s launch.

Payload pits two teams of 20 players against each other in a race against time for crucial intel, as these vehicles carry satellite parts that could help shift the balance of the war between Perseus and NATO.

If the attacking team escorts all vehicles across all Checkpoints within the time limit, they win the match. The defending team can not only pick attackers off the payload vehicles to slow them down, but also buy and build obstacles to stall these vehicles on the tracks.

This all happens as Operators are dropping in constantly with their own custom loadouts, searching for items across Verdansk like Cash and Killstreaks to aid their team in escorting or stopping the Payloads.

Similar to how it operates in Black Ops Cold War and Modern Warfare, the Sentry Gun scans in a near-180-degree radius in front of itself to seek and destroy enemies. It executes this kill pattern for at least a minute after deployment before it collapses via harmless explosion. 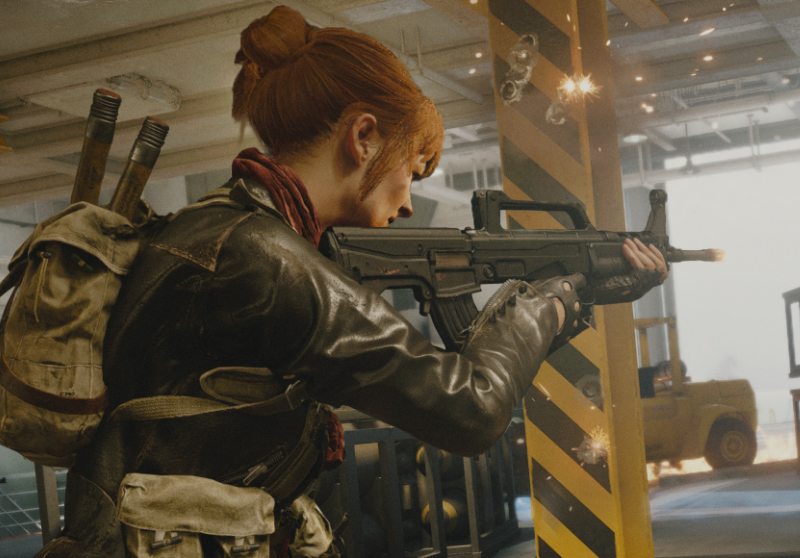 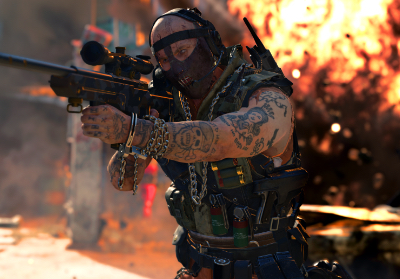