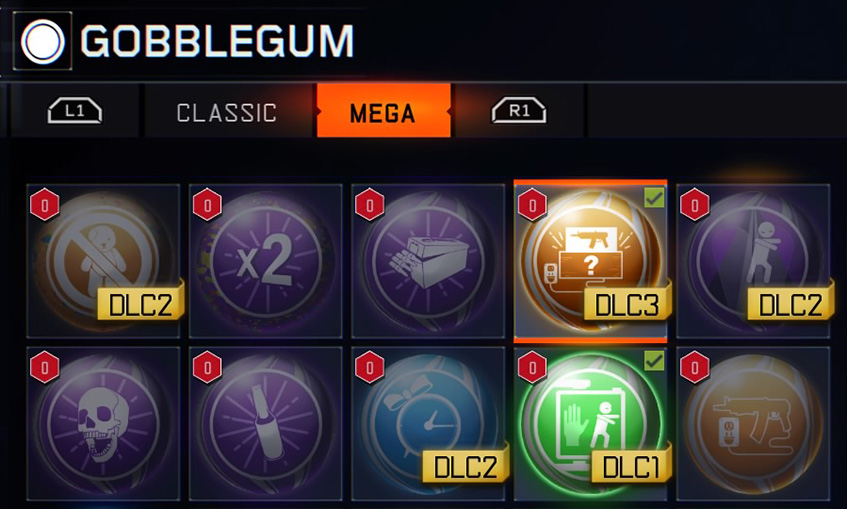 Question: I’m having trouble using the new GobbleGums available in Black Ops III Zombies. What should I do?

Please note: Following the launch of DLC 3: Descent, GobbleGums released with DLC packs can no longer be shared and can only be used on the account used to purchase the DLC. Secondary accounts will not have access to these GobbleGums.

The following GobbleGums have been released in conjunction with each DLC pack:

Spawn a Death Machine power up.

All nearby zombies become crawlers.

Slow down all zombies to shambling speed.

Activates Immediately (Lasts for the remainder of the round)

Any bullet that hits a zombie will damage its head.

Auto-activates when a teddy bear appears in the magic box.

Zombies seen by players will not move.

Any gun wall-buy can be used to buy ammo for any gun.

Zombies you kill with grenades and large projectiles vomit uncontrollably.

Gives a random gun every 10 seconds.

The next gun taken from the magic box comes Pack-a-Punched.

All purchases are free.

Gib the heads of all zombies you can see, killing them.

Revive, or be revived, simply by being near other players. Revived players keep all of their perks.

Points you earn are also received by nearby players, and vice versa.

Ends the current round. All players gain 1600 points.

Auto-activates by getting a kill in last stand (3x Activations)

Auto revive yourself. Keep all of your perks.