THE RISE OF SHADOW COMPANY

As the chaos intensifies across Verdansk and the Armistice alliance becomes strained beyond its breaking point, a new force descends into the conflict. Shadow Company makes an explosively memorable entrance into the world of Modern Warfare, dropping in with style to make a statement and bolster the Allegiance, despite the company’s fireteam seemingly operating independently under their own set of rules. 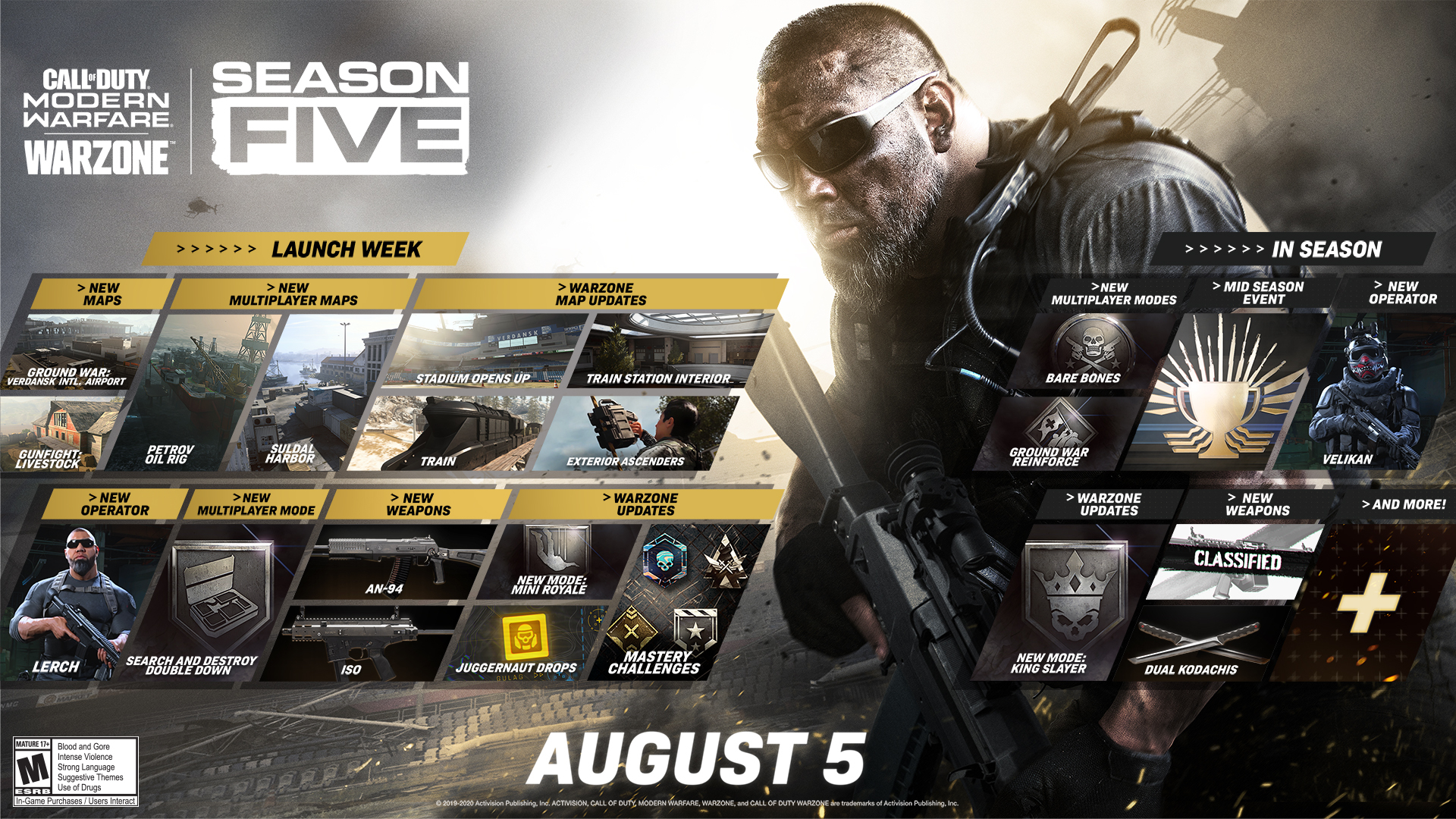 BIO: A cold-hearted operator who is a one-man force multiplier. Former MARSOC member who received a general discharge under honorable conditions. Barely. Thrives in the private sector under where he operates under his own terms.

BIO: [REDACTED] is a shadow of a shadow. Tales of his exploits are written off as fairytales at best and gross exaggerations at worst. Those who know him never speak ill of him. Whether it’s due to fear or respect, no one knows.

The map is divided into five distinct sections. Players start on opposite ends at either the helicopter landing pad or the lifeboat muster station. Other areas include an oil drill, oil storage, a cafeteria, and a center bridge.

Set on an operational oil rig in a frigid part of the world, the station was recently abandoned when Coalition and Allegiance forces clashed. The play area is surrounded by other oil rigs, cargo ships, a docked submarine, and distant glaciers.

For the most part, the map promotes short to mid-range combat with SMGs or Assault Rifles taking precedent. There are a few longer sightlines for Marksman or Sniper Rifles, but players could find themselves outgunned if they only bring long-range weaponry.

Tight chokepoints define the flow between the fish market and shipping areas of the map. Building interiors provide flanks and objective defense, but players can be easily caught off-guard if you don’t watch your corners.

Set in a Middle Eastern harbor, players will navigate through fish markets, shipping areas, and old administrative buildings. The harbor itself is located in a large port city with a medieval castle visible in the distance.

Much like Petrov Oil Rig, Sniper or Marksman Rifles will have utility in particular areas of the map. Players who bring Shotguns, SMGs, or Assault Rifles will have an easier time out-flanking their opponents. LMGs or Ars with Extended Mags will excel in holding the map’s chokepoints, preventing the opponent from reaching their objective.

This Ground War takes place around the airport in Verdansk, which includes the airport interior, the parking garage, nearby apartment complexes, and the hangars on the far end.

Verdansk International Airport caters to all styles of play. The airport, parking garage, and other surrounding building interiors appeal to the type of player who is more oriented towards the close-quarters, run-and-gun approach. At the same time, the rooftops and on-ramps are a sniper’s ideal roost. Exterior spaces between capture points create emergent squad and gunplay moments, which are amplified by the presence of tanks and APCs.

The map initially appears to be a simple layout but, as the player starts to learn the space, it quickly becomes a honeycomb of flank routes both in and around the barn.

A rural environment with a barn in the middle and farming equipment scattered around the map.

This map is pure, fast-paced, close-quarters combat, especially with 12 players on the small map.

Ready to focus on pure, unadulterated combat? Then try out Bare Bones, a rotation of TDM, Domination, HQ, Hardpoint, and Kill Confirmed with the same rulesets as before, but with one important distinction: no Killstreaks, no Field Upgrades, and no Perks.

Search and Destroy Double Down

This variant game mode features elements from the classic Search and Destroy, where one team must plant a demolition charge on an enemy weapons cache. However, this time the stakes are higher, and the scale is greater. This is 12v12, not the usual 6v6. Expect tactics and chaos!

Whether you’re playing Multiplayer or Warzone, the Challenges tab allows you to easily tailor your progression through the Season’s Ranks, whether you’re focusing on Daily, Weekly, or Mission Challenges. Crave an even bigger Challenge for massive rewards? Over a dozen Mastery Challenges have been added across Warzone and Multiplayer for only the most elite players. In addition, don’t forget to visit the Barracks and check on your new Rank Progression section to see all Season Five’s Ribbons and Officer Challenges. Focus on maxing out your Officer Ranks to earn a unique weapon Blueprint.

Unlocked in the Battle Pass

A precision-crafted 9mm submachine gun with a rapid rate of fire. Lightweight, reliable, and compact, this weapon designed to control the battlefield at close ranges.

Unlocked in the Battle Pass

A cutting-edge 5.45x39mm Russian assault rifle with a unique hyperburst feature: The initial shot of a full-auto volley is followed up by an instantaneous second round before significant recoil is felt. This creates a tightly grouped cluster of shots with increased damage potential. The mechanism is fed by a canted magazine, and a reciprocating receiver helps control the recoil.

Test your skills in Trials. Solo experiences that hone the intangibles and reward XP for your efforts. Players can take on eight new Trials this Season:

The Stadium Gets Cracked
The Acropolis National Arena (AKA Verdansk Stadium) is receiving a multitude of new visitors now that the Shadow Company announced their presence in an explosive, roof-based insertion. Time to retool your strategy and rethink your drop plans around this massive super-structure, complete with a pitch surrounded by rows of seating, an additional underground parking structure, a concession stand lobby, and other interior concourses and field access you can secure and compete to control.

The Train Station is Lit Up
The stadium isn’t the only large-scale location getting interior access; the ornate and imposing Verdansk Train Station is also open for Operators. The station buildings feature several areas to explore, all linked to the main ticket hall and platforms. This significantly changes the overall look, feel, and tactical outlook in and around this area of the Warzone map.

Freight Train: On Track for Epic Confrontations
A hulking freight train is on a path of destruction, and it’s up to you and your fellow Operators to use this locomotive behemoth to your tactical advantage! The train rolls through one of the main arterial railroad tracks that circumnavigate the southwestern part of Verdansk in a large loop. It can be a source of protection, an epicenter of firefights, and even offers some exceptional takedown potential if your team claims the train for themselves, and guards it with additional vehicles and heavy weaponry.

Going Up in the World: Exterior Ascension
Need to take down a troublesome sniper? During past navigations through multi-floored building interiors (usually located in downtown Tavorsk District), you may have clamped onto a vertical zip line inside an elevator shaft to gain quicker access to the top of the structure. Now you can expect additional and strategically positioned Exterior Ascenders dotted throughout Verdansk. These will primarily be attached to the exterior of taller buildings, enabling you to gain a tactical and height advantage from a different angle, and with more haste than ever before.

Mini Royale: This condenses the craziest parts of the main Battle Royale mode into faster-paced chunks of chaotic and almost constant combat. Mini Royale lowers the number of Operators sent into Verdansk but quickens the BR experience: Only the first and last five minutes of a standard BR game exist, meaning rapid deployment, constant movement, and high-kill strategies are set to yield victories that are both short and sweet.

Weapon Rotation: The weaponry you discover lying on the ground or in Supply Crates has been meticulously updated to potentially provide new pre-Loadout Drop weapon tactics for your squad. Expect eight Common, 13 Uncommon, 15 Rare, 19 Epic, and 25 Legendary variants to find throughout Verdansk.

Wartracks: Jam out to some sweet MW tunes while cruising through Verdansk with Wartracks, available in the Battle Pass. Get three unique songs, including the pulse-pounding "Sepulchre" to amp up your Warzone experience. Equip one track to a specific vehicle in the Vehicle Customization menu (like Battle Horns), then as soon you hop in, the music gets turned up. Your entire squad can listen to the beat while you drive, and let the song guide you to your primary objective – survival. All three tracks are instantly unlocked when you purchase the Battle Pass.