Launching on June 22, Mercenaries of Fortune brings new challenges and opportunities for Operators. Deploy to a brand-new Warzone map in Fortune’s Keep, fight on a battleship in the Vanguard Multiplayer map USS Texas 1945, and wade through the swamps of Shi No Numa in the return of classic round-based Zombies. 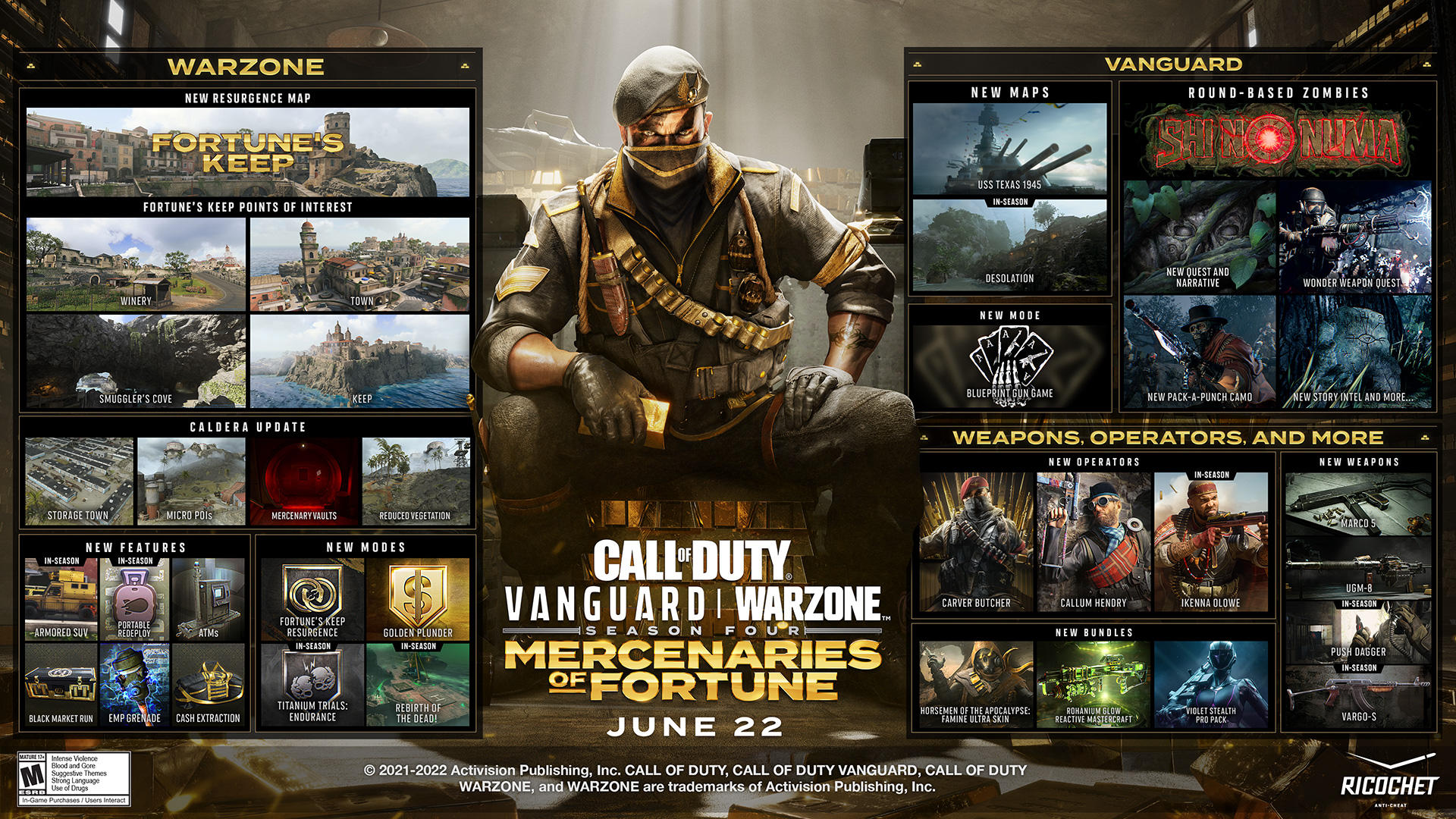 Butcher served in the British Army during Operation Devon, battling against the 16th Panzer Division. He was dismissed after sustaining injuries to his face from exploding shrapnel but returned to the front lines soon after. There he witnessed resistance fighters in action.

Inspired, went on to become the founder and recruiter for the Special Operations Task Force. The rest, as they say, is history.

All his life, Callum was a showoff, getting into trouble with neighbors, the law – everyone. His unwavering spirit helped him quickly ascend the ranks of the British Army to eventually become a recruit trainer. In World War II, Callum, harboring deep hatred for Nazis and their ideals, fought hard for a future without them. Currently he is the trainer for all S.O.T.F. agents.

Ikenna Olowe understood strategy from a young age. As a child in Nigeria, he excelled at chess, quickly surpassing his teachers. He grew strong studying Gidigbo, a martial battle of wits. Balances in body and mind, Ikenna joining the war effort as a battlefield engineer. His work established critical supplies lines across the globe. Ikenna became a grand planner. Knowing when to build and when to demolish. 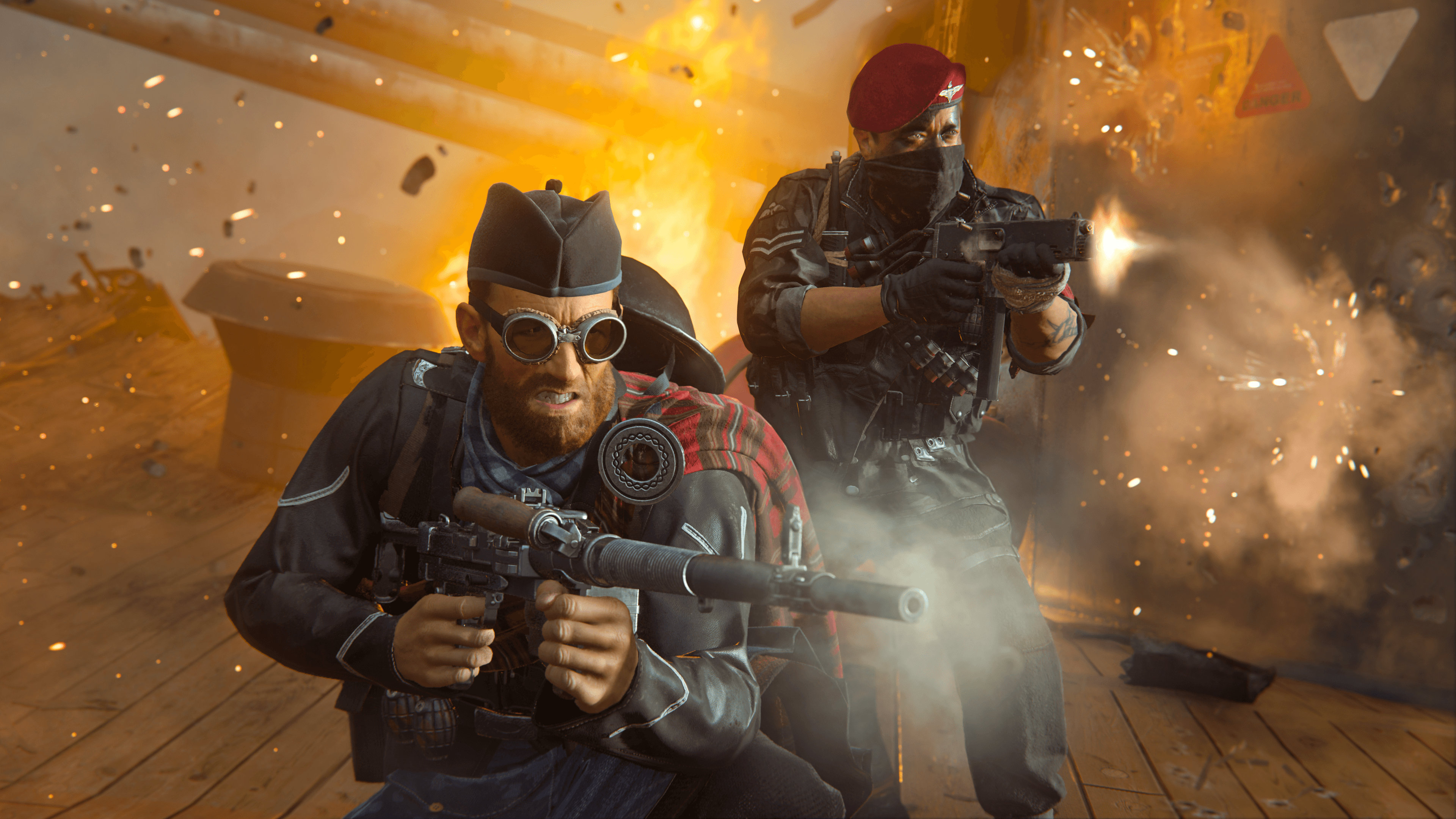 For the highly mobile, aggressive player, there are few better options than rushing into battle with the Marco 5 SMG. It’s great for pushing into objectives, as its high mobility allows you to run circles around the enemy while they struggle to get a bead on your position.

Considering its relatively noticeable recoil and damage falloff at longer distances, the Marco 5 is best when fired from the hip at closer ranges. As the first SMG in Vanguard to feature the Akimbo Proficiency, you’ll soon wonder why you ever needed to aim down sights in the first place.

Who says an LMG has to slow you down? Combining high mobility with a high fire rate, the UGM-8 is ideal for players looking to keep pace with their teammates while offering suppressive fire.

This thing chews through ammo, so be prepared to feed it. Boost your ammo capacity with one of several different Magazine options or grab Fully Loaded or the Scavenger Perk to prevent going empty in the middle of a fight.

A blade with a T-shaped grip that allows for increased push power. Easily concealable and deadly in CQC.

Built for speed and stealth, this new melee tool will be a great addition to loadouts where close-quarters fights and silent takedowns are critical to a mission’s success.

Operators can unlock it either through a bundle to be made available during Season Four, or by completing one of two challenges:

In Multiplayer, get 5 Melee Kills with a Primary Weapon in a Single Match 15 times.

In Zombies, get 100 kills with a Melee weapon while shrouded by your Aether Shroud.

An essential armament for versatile play. This workhorse Assault Rifle offers a high-fire rate, steady aim through sustained fire, and a quick reload, and that’s before adding any of its Gunsmith attachments.

During the season, be on the lookout for a new melee-based challenge that can unlock this new Secondary Weapon, along with a new Store Bundle that will feature this bludgeoning tool.

Unlock both the Marco 5 and the UGM-8 for free through the Seasonal Battle Pass System; more information to come.

Unlock the Push Dagger and the Vargo-S in one of two ways: through an in-game weapon-based Challenge or via a Store Bundle to be released later this season, featuring a Weapon Blueprint from this weapon’s family. 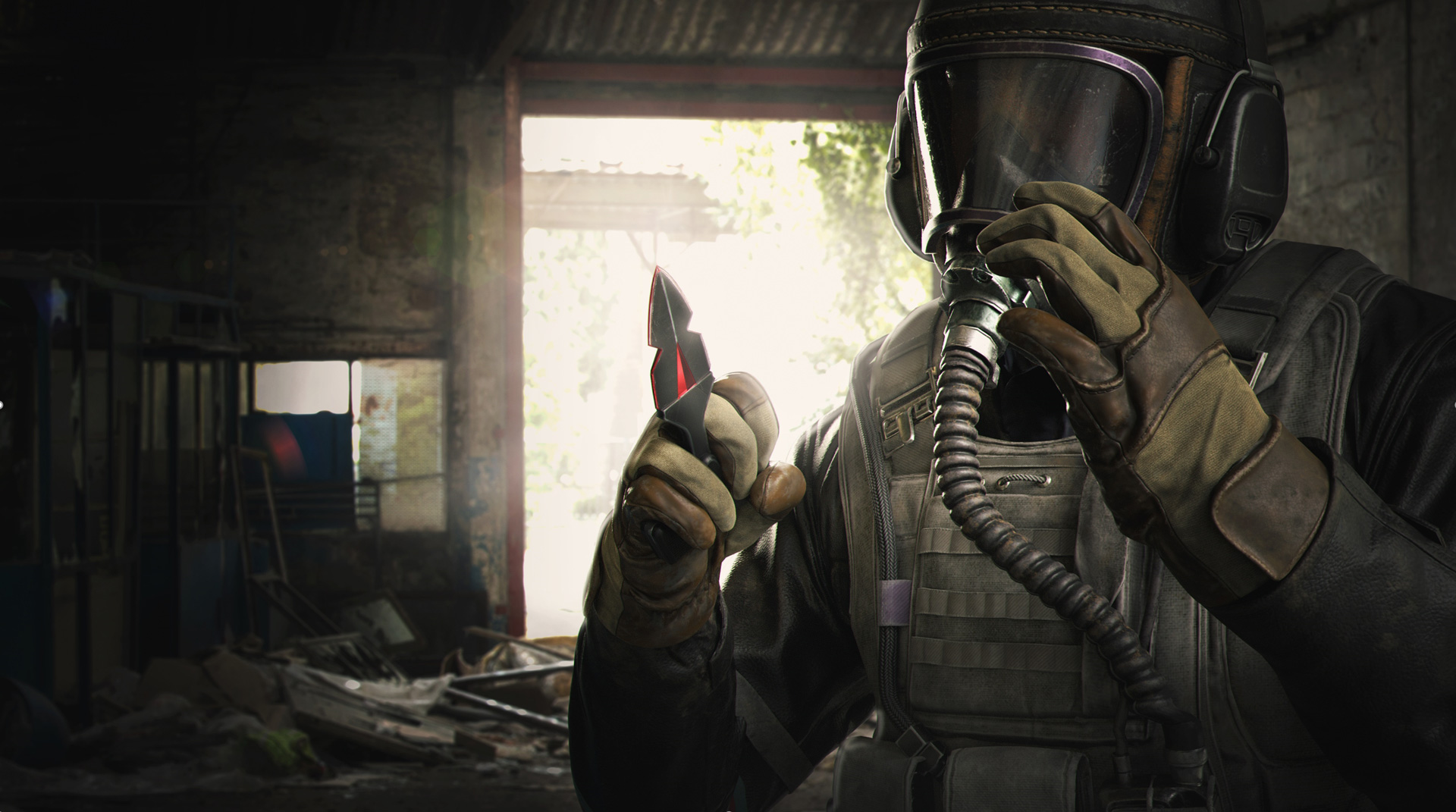 USS Texas 1945 challenges Operators to fight it out on an offshore battleship designed for tense long-range engagements on starboard and port and plenty of close-quarters action amidst its many confined interior locations. Set up on a power point and do your worst.

A reimagining of the U.S.S. Texas map from Call of Duty: WWII, this is a medium-sized map that's moved from the White Cliffs of Dover to the waters around Caldera.

Deploy to a Pacific listening post in this small-to-medium-sized map set in a dense village littered with destruction. Large mountains and a vast landscape engulf the environment as you battle around the central building and along its creekside fortifications. 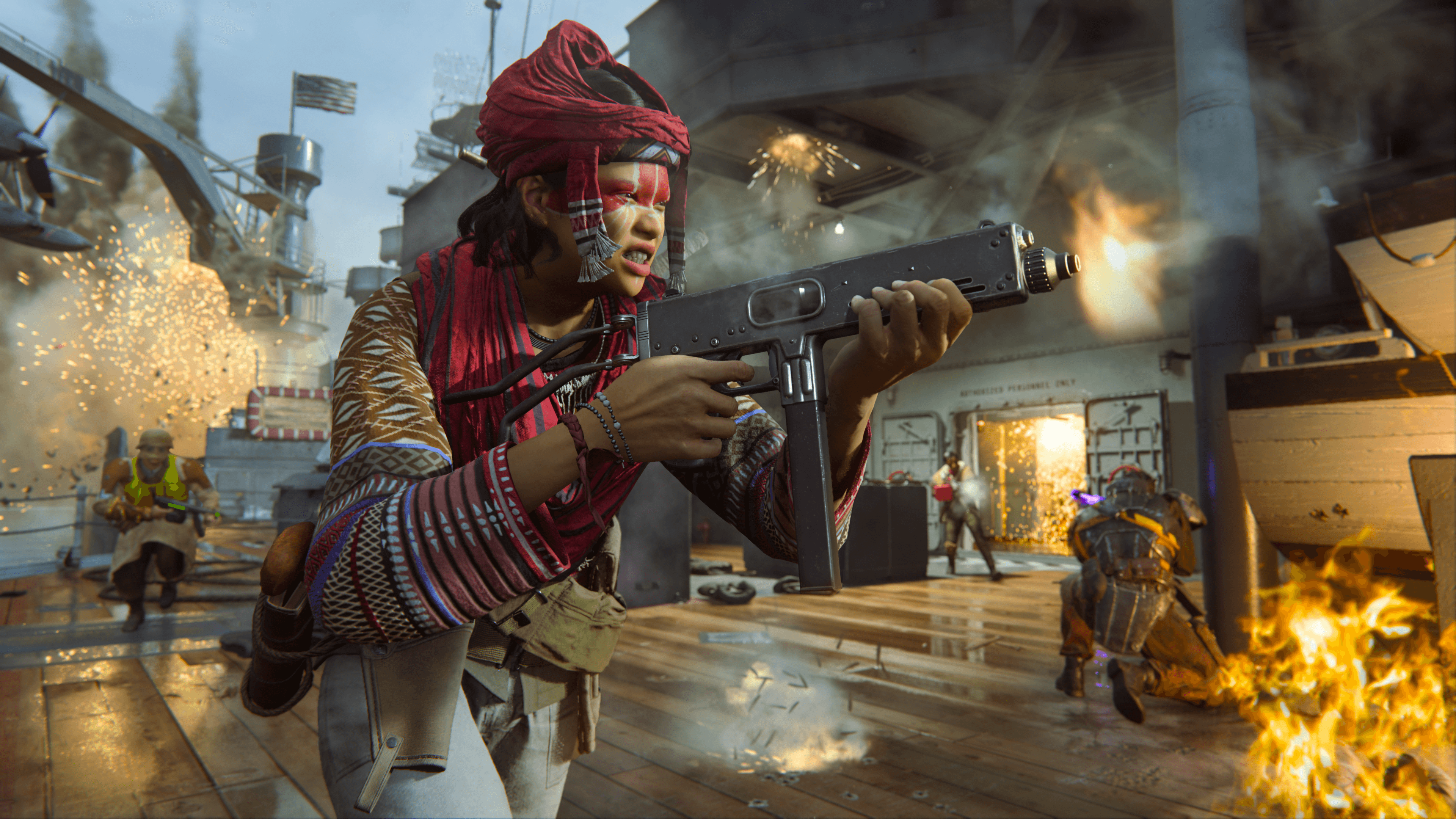 Be the first Operator to progress through all 18 weapons to win the match. Eliminate an enemy to cycle to the next weapon. Melee an enemy to set them back one weapon and get the final Throwing Knife elimination to secure victory.

No Perks, Killstreaks, or custom Loadouts allowed. Blueprint Gun Game is all about showing your mastery with a diverse weapon set, making it the perfect means of training up your weapon skills across the board. 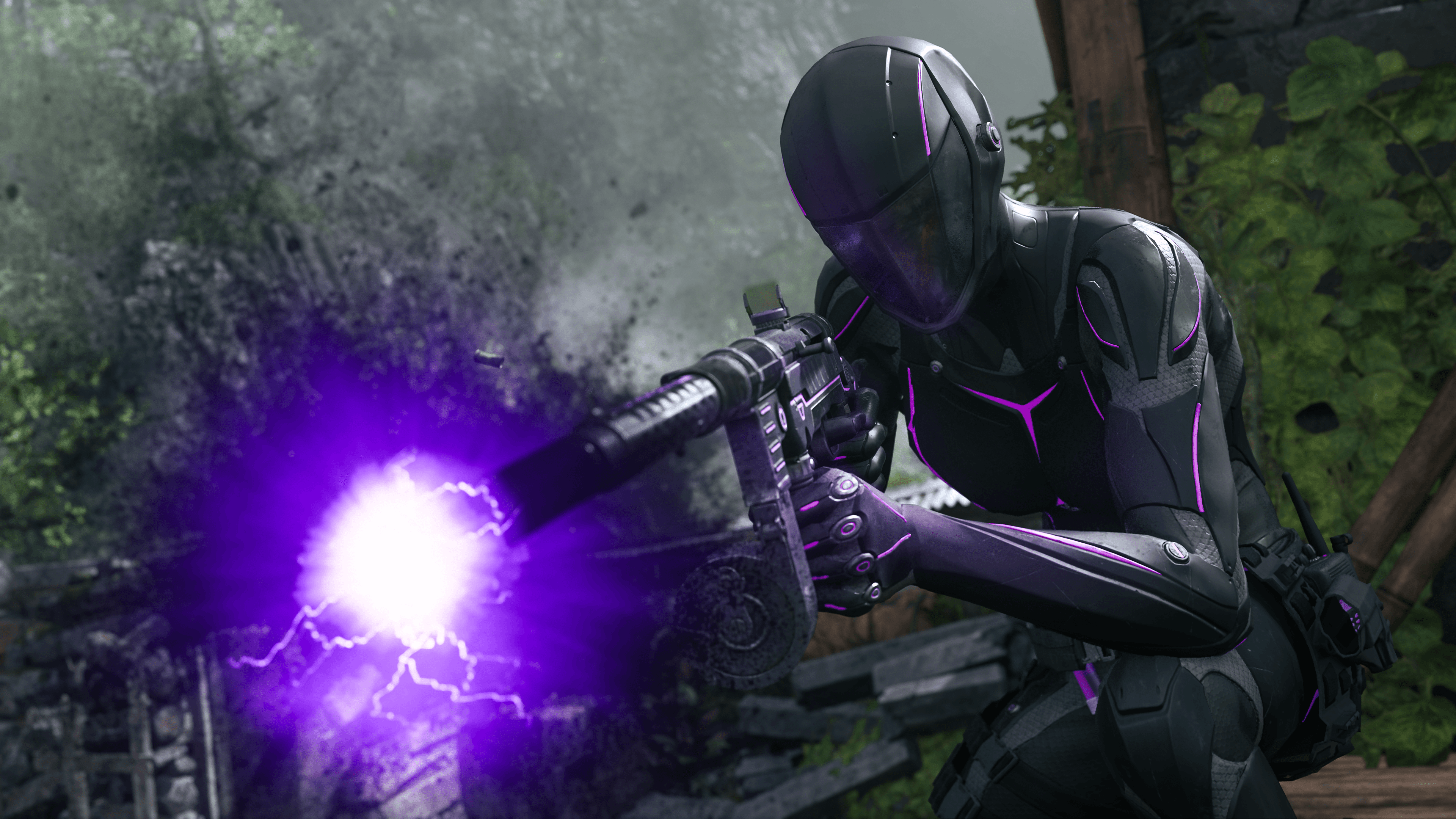 Prepare for the ultimate score: fight fellow Operators and mercenaries on a luxurious and timeless island, where the amount of danger and action is second only to its riches.

A mercenary hideout built atop an otherwise peaceful town with a rich history, Fortune’s Keep is a completely original Resurgence map created by High Moon Studios. It is roughly the same size as Rebirth Island and features four distinct points of interest:

Inspired by colorful Mediterranean villages, this seaside community is littered with cobblestone alleyways and flat rooftops to traverse across. An old fortress sits in the town’s center, inviting Operators in for intense combat with its bell tower that commands this section of the map.

Other notable sections include a coastal path with a gazebo and a Graveyard that seems to have been grave-robbed multiple times over.

Legend has it that pirates from centuries ago used this island to hide their treasures. True to its name, Smuggler’s Cove is loaded with supplies, including Gas Masks that could be helpful in case of a Circle Collapse.

Be prepared to explore the twisting Sea Caves, Grottos that see sunlight shine through massive holes in the earth, a small collection of fishing huts, and a lighthouse.

The island’s namesake, the Keep is a medieval fortress now converted into the mercenary’s headquarters and hideout.

Walk on the ramparts and take to the watchtowers to defend the area from invaders, but know that they can also easily fly over the walls using nearby Redeploy Balloons or sneak into the area using the island’s tunnel system.

A laidback complex inspired by traditional three-lane maps, the Winery serves up plenty of scavenging opportunities and intrigue.

Head to the Cellar to stock up on supplies, or travel over to the nearby Camp that contains a helipad and multiple military tents.

Those looking for a more secluded start may want to drop in at the Bay, which has routes over to the Winery proper and the Keep.

Storage Town, the area that helped define nearly two years of Warzone in Verdansk, will see a new life on Caldera when it is added in between the Mines, Airfield, Village, and Dig Site.

It will be roughly as veterans remember it: a sprawling complex of lockers filled with Contracts and item spawns, as well as a few warehouses that allow for great views over the area.

However, as part of Caldera, Storage Town will be near steep cliffs in the middle of the island. This additional verticality will add a twist to this fan-favorite point of interest, making it a more viable rotation point when traveling between the map’s western section.

A severe drought hit Caldera, causing rivers to dry up as mercenary forces add camps around the island. There are also new items and a vehicle coming to Caldera first, which should shake up modes like Plunder.

Once this update launches, expect cleared sightlines across numerous areas on the island, partially due to small camps cropping up from outside the Resort to the Runway.

Additional pathways, including scaffolding across multiple Capital Buildings and steps near the Gondola Station, will be opened up to allow for more movement options around the island.

Around Caldera, rumors of Mercenary Vaults are beginning to crop up – expect to find these scattered around the island.

Prove your skills in the Mercenaries of Fortune event, featuring eight challenges that test your mettle on Caldera and Fortune’s Keep.

Complete all eight challenges to earn the coveted gold skin for the Armored SUV. Ride around in this thing and there’ll be no mistaking you for a common mercenary. 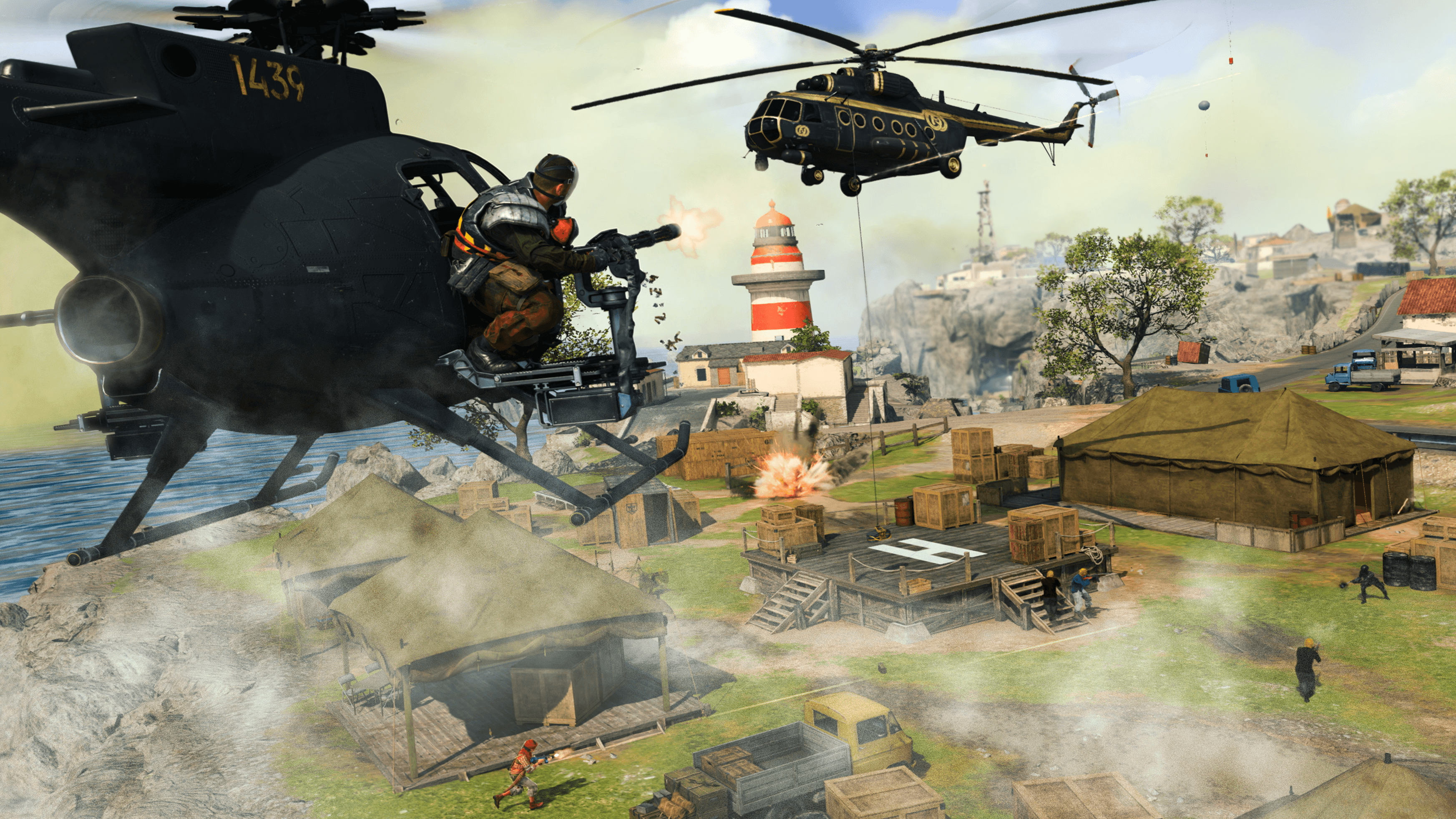 Thirteen years after its original release in World at War, the legendary round-based Zombies experience Shi No Numa is returning as part of this free update to Vanguard.

Team up and conquer the “Swamp of Death” in classic round-based Zombies play, featuring a new main quest and side quests, a new Wonder Weapon quest, fresh intel, and more.

New Main Quest, Wonder Weapon: Wade through the swamps as you journey on a multi-step quest culminating in a devastating battle. Complete the quest in full to show off your prowess with a new Calling Card. Watch for hidden secrets throughout in the form of multiple side quests waiting to be uncovered in the swamps.

Fast Travel, Classic Traps: Tactically reposition yourself from the undead fast using Shi No Numa’s zipline system and when the horde is nipping too close to your heels, run them through the flogger or your electro-shock defenses.

Experience the map in a new way through Vanguard’s unique features like exchanging your Sacrificial Hearts for upgrades at the Altar of Covenants and the Tome of Rituals. 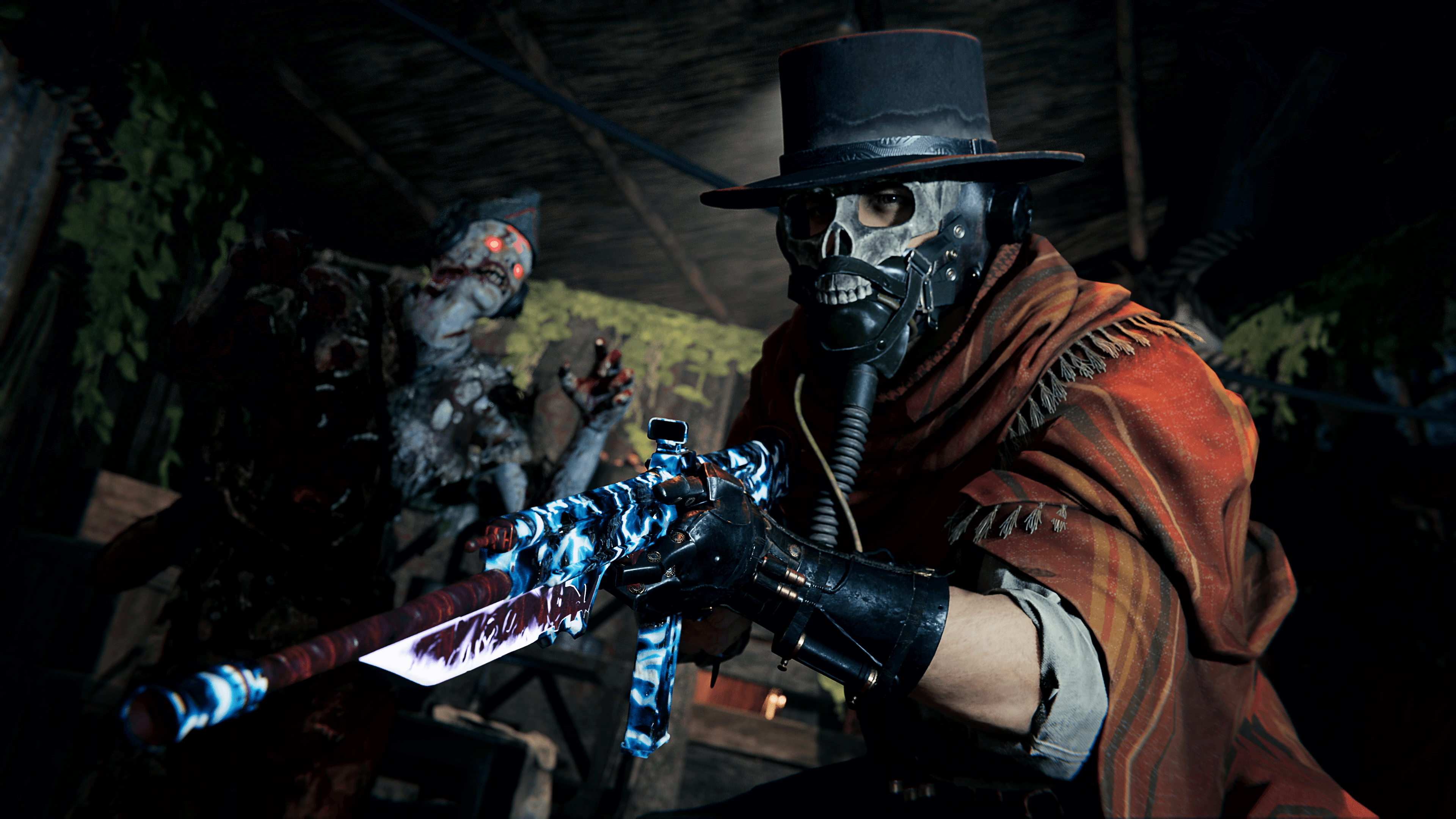 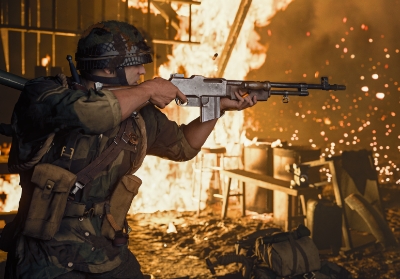 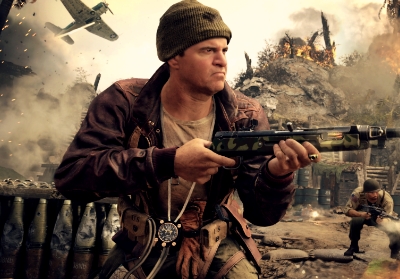