What you need to know about the Campaign for Call of Duty: WWII 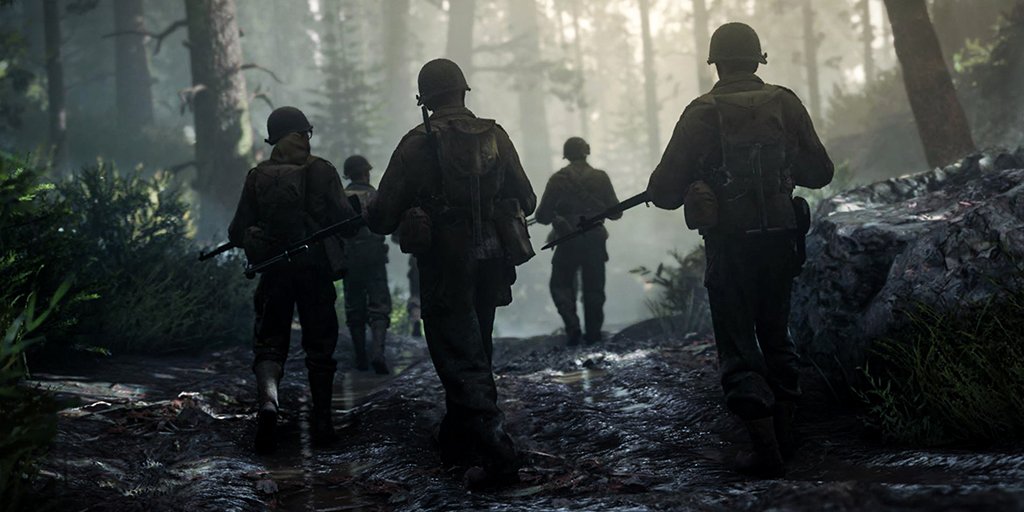 In Call of Duty: WWII's Campaign, you take on the role of Private Ronald "Red" Daniels, a Texas farm boy freshly recruited to the United States Army. Private Daniels has military pedigree and looks to extend his family's legacy, joining the legendary 1st Infantry Division.

While you'll play as Private Daniels through most the story, you'll interact with and occasionally play other heroes across the European theater of war, storming the beaches of Normandy at the outset and culminating with an assault on the famous Germany itself.

If you're new to Call of Duty, check out the Campaign Basics section below for an overview of Movement and Stances, Using Weapons and Equipment, the Heads Up Display, Campaign Objectives, and Game Difficulty settings.

Veteran Call of Duty players can skip to Advanced Tactics to learn about new features introduced in Call of Duty: WWII.

Movement is your most basic player action, but it's an important concept to master if you want to stay alive. Moving forward with the left thumbstick or the W key puts you in a light jog. Using the right thumbstick or the A and D keys while moving allows you to strafe to the left or the right.

You can also sprint in short bursts. Use your sprints wisely, as you'll need to rest after sprinting continuously for a few seconds.

While not a key component of the Campaign, you can jump and climb over obstacles. These are mainly used to advance through missions rather than serving as defensive tactics.

When you're not moving, you have three basic stances: Standing, Crouching, and Going Prone.

Movements will only get you so far under the onslaught of enemy fire. You'll also need to incorporate weapons and equipment if you want to survive.

Almost every ammunition-based weapon can be fired two ways: aiming down sights and hip firing. Aiming down sights (or ADS) is much more accurate and generally more effective. That's not to say hip firing isn't useful, but for less experienced players it should be used sparingly.

There are six basic weapon categories in the Call of Duty: WWII Campaign, and you should learn how to use each one. Not only do certain weapon types give you an advantage in various combat situations, there might also be times where you have only one weapon type at your disposal.

Note that weapons in each category vary by damage, accuracy, and reload speed, among others, so it might take some experimentation before you find the weapon you like the best.

Soldiers are also armed with frag grenades in Campaign, and they can serve two purposes.

The first one is obvious: blowing up the enemy. Pressing the Lethal Grenade button tosses the grenade in the direction you're facing, so be sure you're looking in an enemy's direction before throwing a grenade.

Grenades have about a five-second window between the time you throw and the explosion, which gives the enemy a bit of time to flee. You can cut down this time by "cooking" your grenade before throwing it. To cook a grenade, hold down the Lethal Grenade button, aim, and throw. Cooking a grenade too long causes it to explode in your hand or your proximity.

A grenade can also be used to flush out the enemy. If enemies are behind cover, tossing a grenade in their direction will cause them to scurry and give you and your fellow soldiers a chance to take them out. 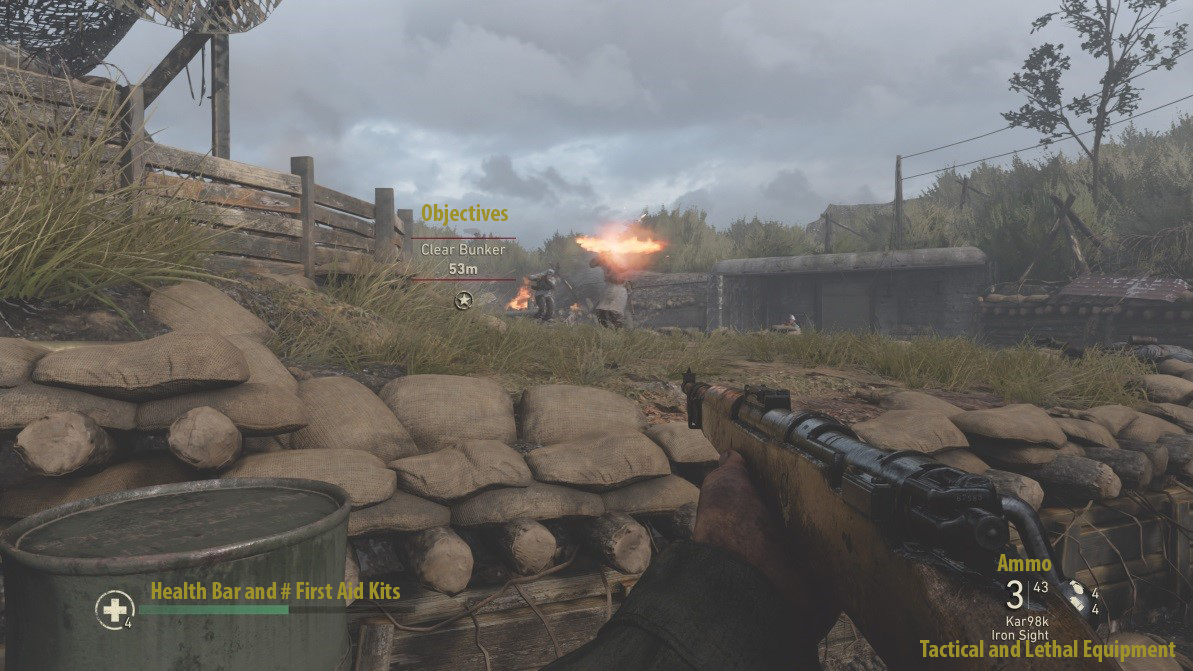 The Heads Up Display (HUD) provides vital information about your weapon and equipment, your health and first aid kits available, and your current Objective.

On the harder difficulty settings, your soldier has less health and can take much less damage. On the flipside, enemies toss more grenades, use cover more effectively, and fire more accurately. 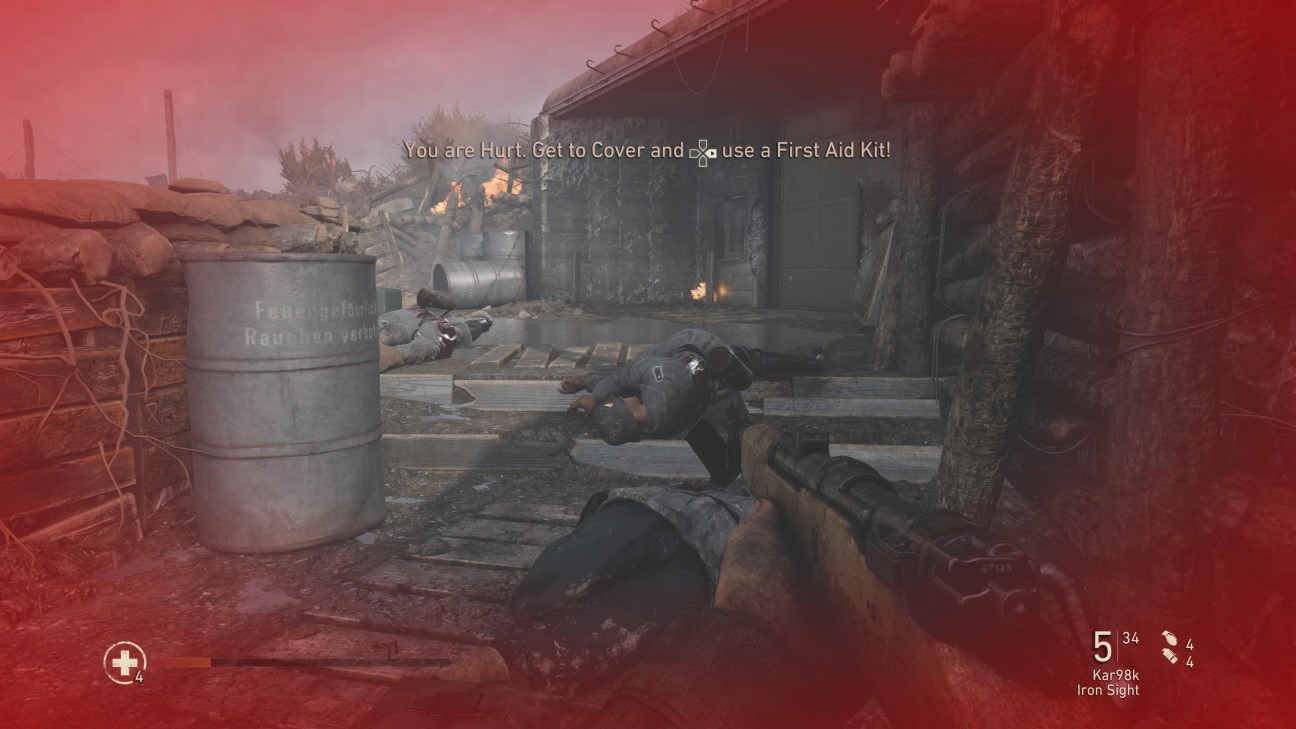 In recent Call of Duty games, the only way to replenish depleted health was to avoid taking damage for a few seconds. In Call of Duty: WWII, you can use first aid kits to heal yourself. Note that first aid kits only refill your health meter and do not give you extra health beyond your set amount.

First aid kits can be found scattered around the battlefield, and you can pick up and add up to four first aid kits to your inventory. You can also call in first aid kits from a squadmate named Zussman by pressing the button indicating on screen.

Heroic Actions are just that: epic accomplishments you perform on the battlefield. Each of these three Heroic Actions gets you closer to unlocking a Squad Ability.

You're rarely alone in Call of Duty: WWII, as your Big Red One squadmates will often accompany you and sometimes help you complete missions. As you progress through the story, enemy kills and Heroic Actions will unlock Squad Abilities. Each squadmate has a morale meter that tracks your progress toward unlocking each ability.

Note that Squad Abilities are not available on every mission level. You'll know a Squad Ability is available if you see the squadmate's portrait in the bottom-right corner of the HUD.

Each mission level includes three hidden Mementos, which include items from the era. Mementos glow when you are nearby to help you collect them all.