A breakdown of the different editions of Call of Duty: Modern Warfare II, including cross-gen options for consoles and pre-order incentives

Following the harrowing and breathtaking events from Modern Warfare, Task Force 141 returns to action through a global Campaign, immersive, world-class Multiplayer, and an evolved Special Ops experience, all carefully crafted with gameplay and technical innovations that will introduce fans to the new era of Call of Duty.

Call of Duty: Modern Warfare II is available now for pre-order on PlayStation 5, Xbox Series X|S, PlayStation 4, and Xbox One, and pre-purchase on PC through Battle.net and Steam.

Pre-order or pre-purchase any digital or physical edition of the game and get Early Access to the Call of Duty: Modern Warfare II Open Beta*. Stay tuned for more details about the Open Beta*. 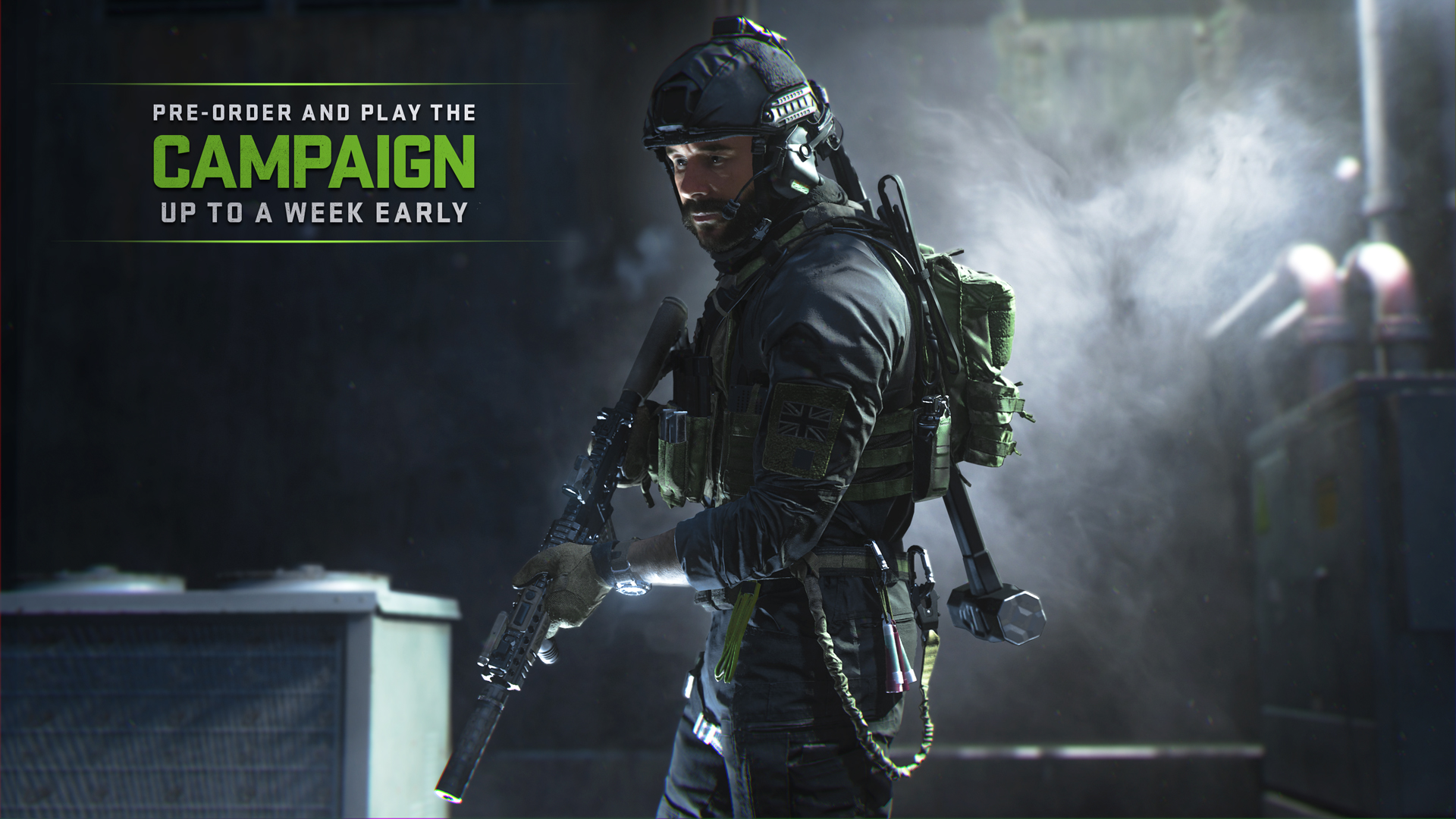 Pre-order any digital edition and get up to one week† of Early Access to the entire Call of Duty: Modern Warfare II Campaign beginning October 20. 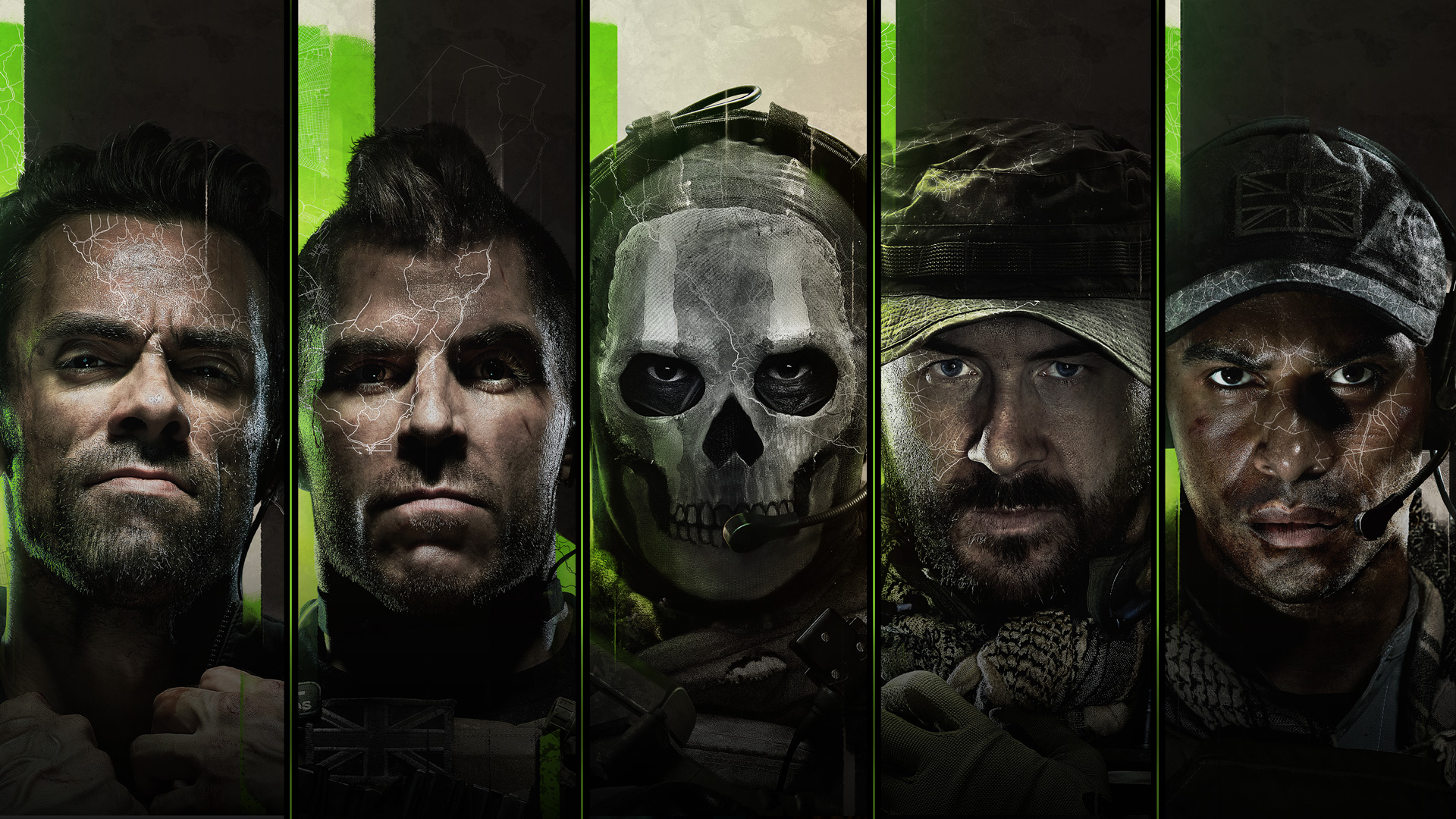 In addition to Early Access to the Call of Duty: Modern Warfare II Open Beta*, pre-orders of a Digital Cross-Gen Editions will also include additional rewards that will be announced at a later date.

Please note: When installing the game on a next-generation console, be sure to install the next-generation version of the game, as both versions may be available for download in this Cross-Gen Bundle.

The PC Standard Edition is only available digitally and can be pre-purchased through Battle.net and Steam.

Players who pre-purchase a PC Standard Edition will get Early Access to the Call of Duty: Modern Warfare II Open Beta* as well as additional rewards that will be announced at a later date.

The CODE Edition, available exclusively through select retailers, is a specially-marked Physical Edition that includes a Call of Duty Endowment-themed Calling Card, Animated Emblem, and Sticker for use in Call of Duty: Modern Warfare II.

This Call of Duty Endowment bundle will be available for immediate use on October 28.

Please note: Physical editions of the game will not operate on a digital-only PlayStation 5 or Xbox Series S. 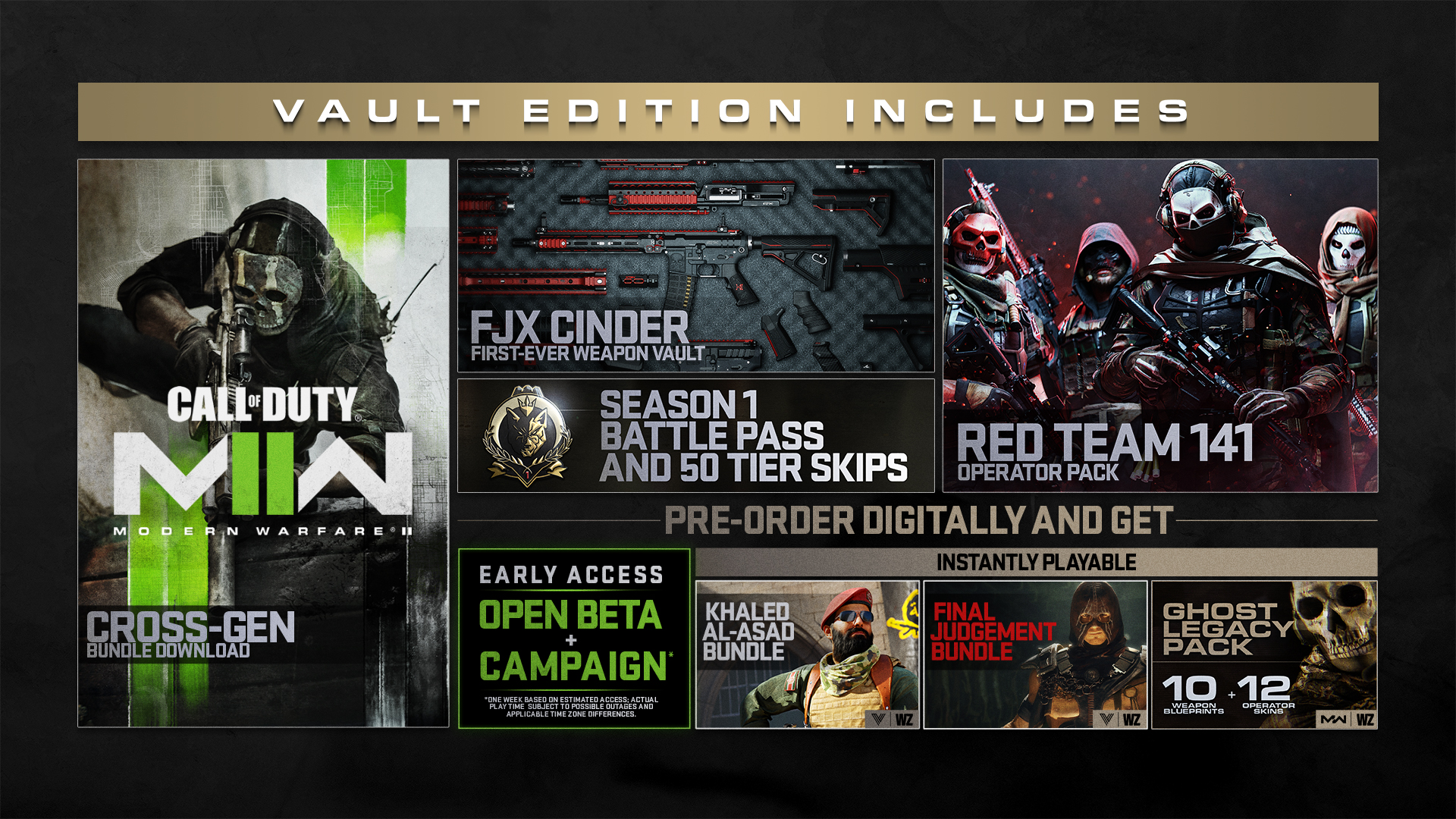 Available on all platforms, the digital-only Vault Edition offers the most content of any version of Call of Duty: Modern Warfare II.

In addition to the base game – Cross-Gen Bundle version on consoles, Standard Edition on PC – and Early Access to the Call of Duty: Modern Warfare II Open Beta*, the Vault Edition includes the following bonus content. 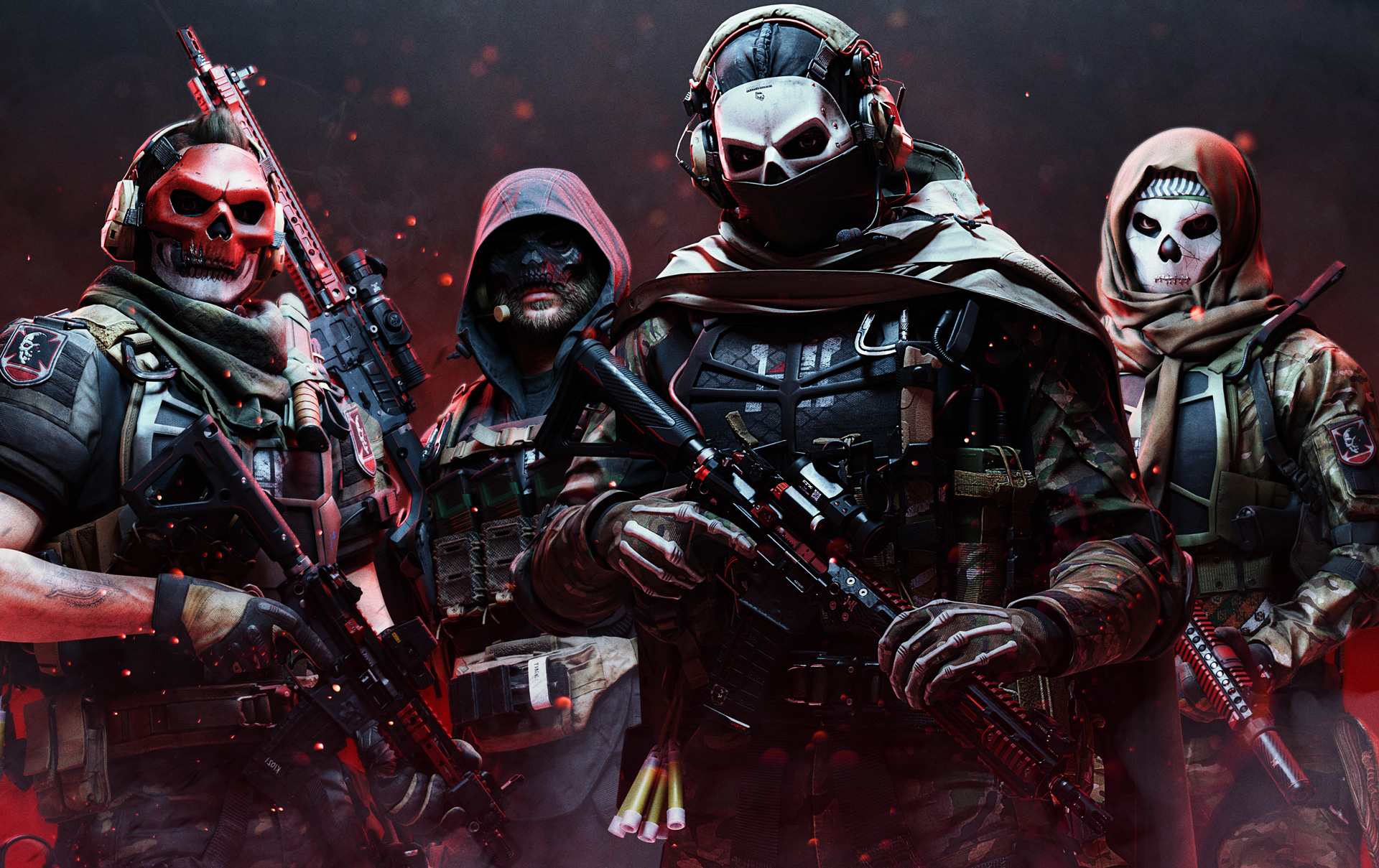 Players who pre-order the Vault Edition will be able to use the Red Team 141 Operator skins during the Beta. 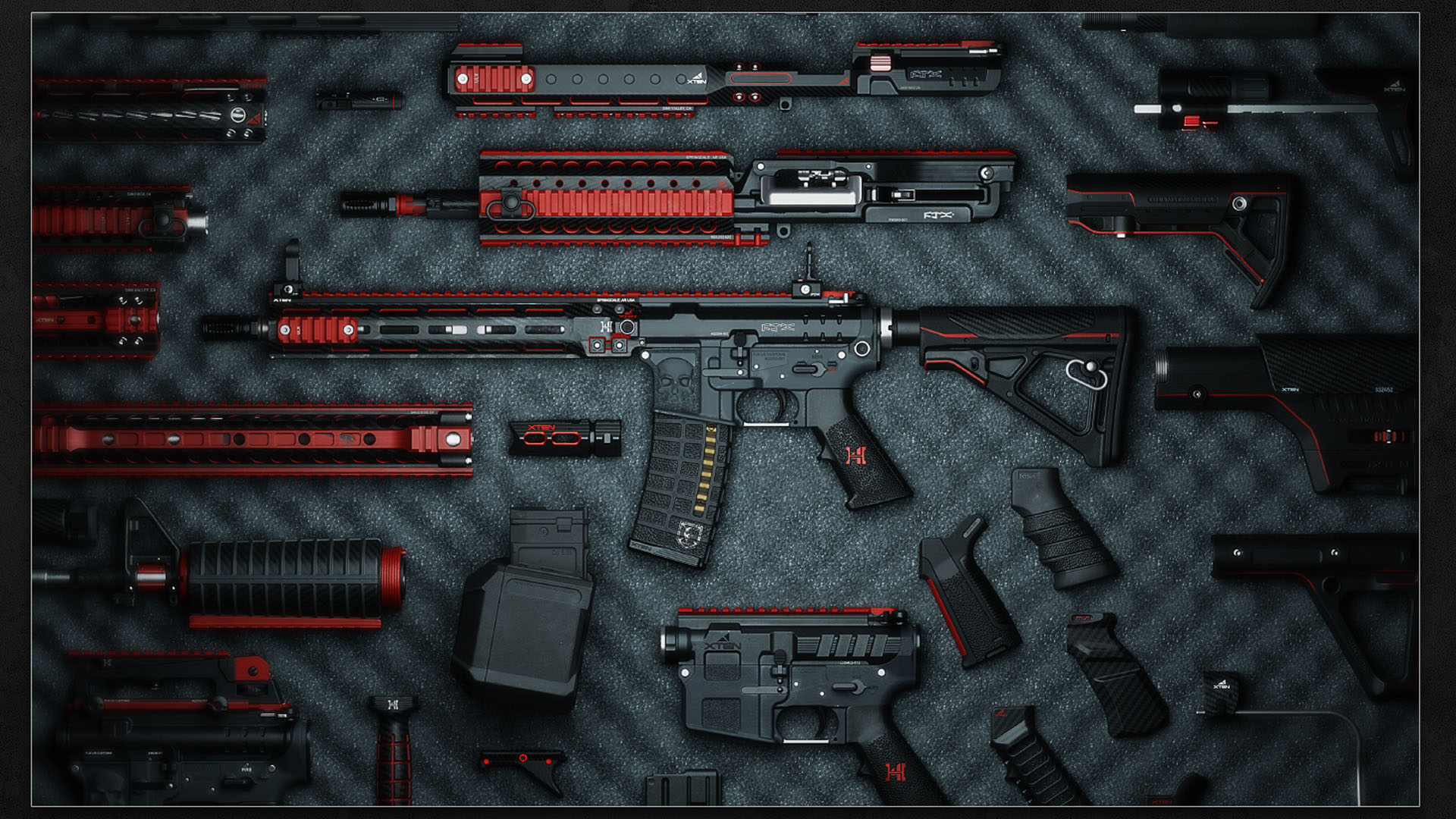 Players who pre-order the Vault Edition will be able to use the FJX Cinder Weapon Vault during the Beta.

Details about the FJX Cinder Weapon Vault and the new Gunsmith will be revealed closer to Call of Duty: Modern Warfare II's launch.

Players who pre-order the Vault Edition will gain access to one season of the Battle Pass and 50 Tier Skips (or its equivalent) at launch.

Players who purchase the Vault Edition after Season One can apply the free Battle Pass and Tier Skips to the current season. 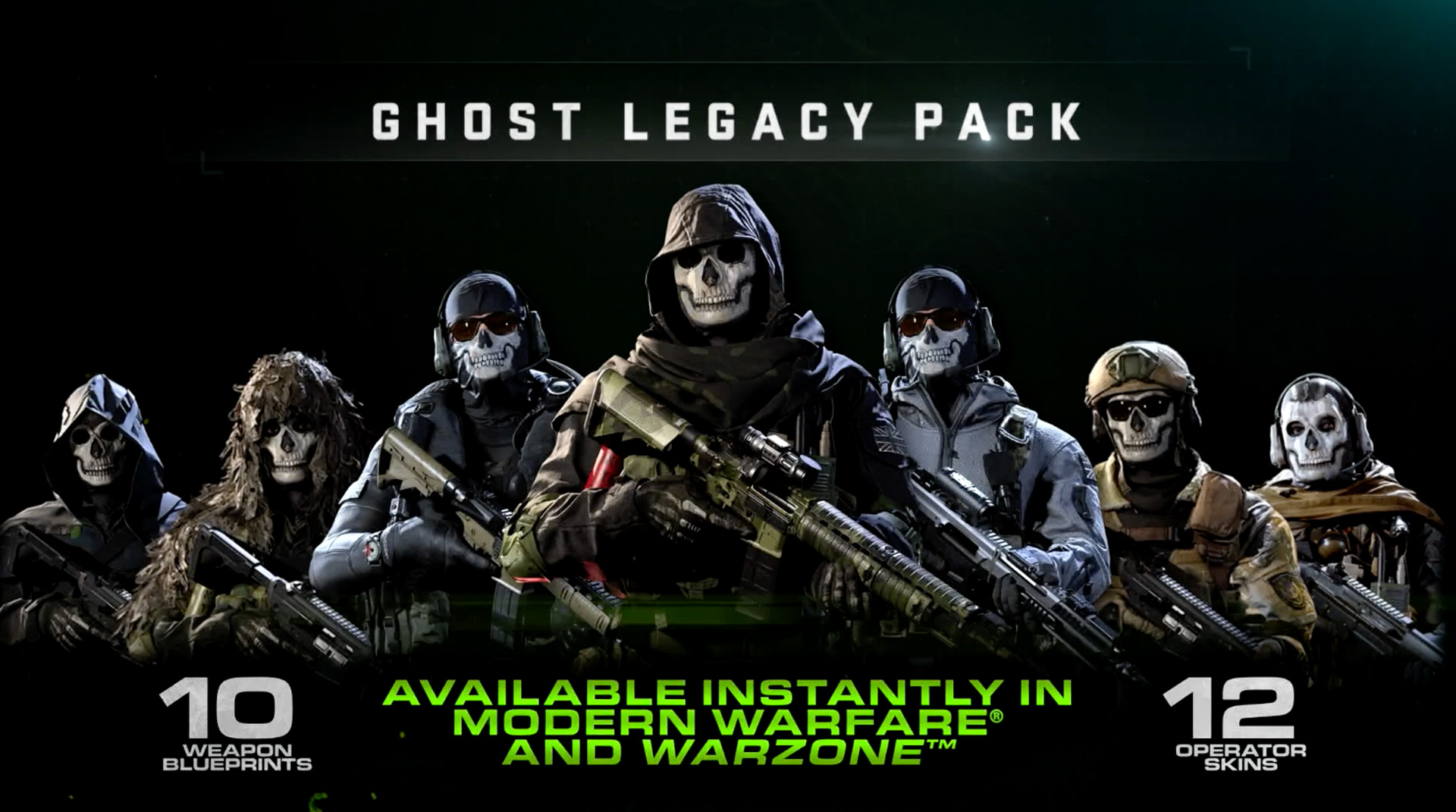 Instantly unlock 12 Operator Skins for the Ghost Operator and 10 Assault Rifle Weapon Blueprints for use in Call of Duty: Warzone and Call of Duty: Modern Warfare (2019).

Upgrade to the Vault Edition

If you've pre-ordered a digital edition of Call of Duty: Modern Warfare II and want to upgrade to the Vault Edition, follow the steps below based on your platform.

Keep an eye on the Call of Duty Blog as more details about Call of Duty: Modern Warfare II, the Open Beta*, and other incentives are revealed leading up to launch. 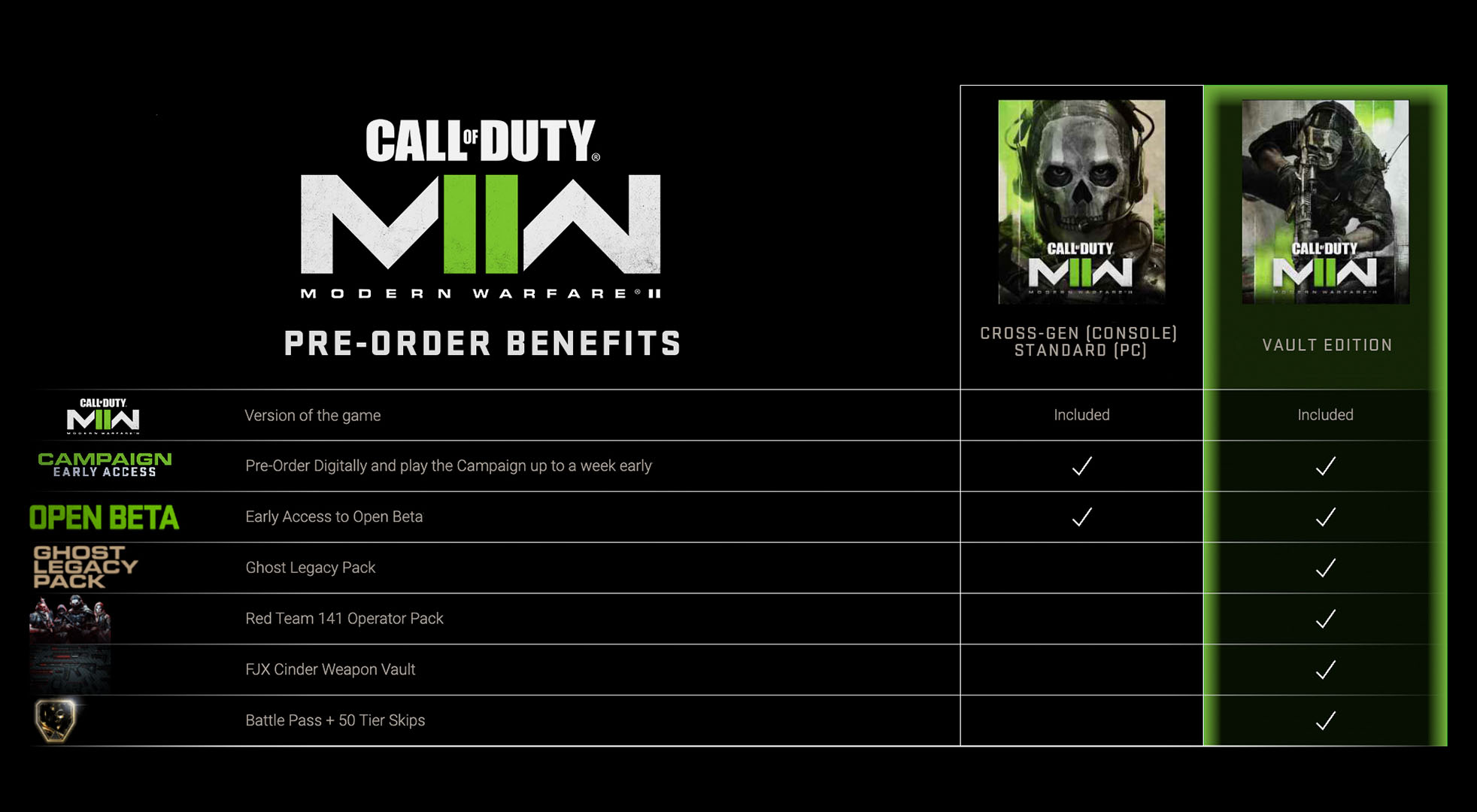